To access news, events, prayer, formation and many other ideas and Vincentian links go to
www.famvin.org

According to an English Dictionary, the word collaboration means the effort of two or more people who come to work together in order to achieve a special goal. The key words here are ‘work’ and ‘together’. In two words, collaboration means a ‘joint effort’. It is one good strategy for transformation especially when there is an understanding of shared mission.

Collaboration as working together originated with God the creator when he said, “let us make human in our own image…” (Gen 2:26). In the New Testament, Jesus spent his life building a collaborative enterprise. His invitation to discipleship, “… come after me, and I will make you fishers of people (Matt. 5:19), is a call to collaboration.

Undoubtedly, St. Vincent de Paul (1581-1660), following Jesus our Lord, was very good in “getting diverse groups of people to work together, and he used every means to inspire in them sensitivity to the poor, who are the privileged image of Christ” (Constitution of the CM: Introduction). Despite his innovative ingenuity, Vincent knew well enough the necessity of collaboration in his approach to work and projects. He so often labelled or termed the establishments he founded either as “confraternity” or “company” or “little company”, not merely because of size but for reason of collaboration that would enrich his mission of charity. 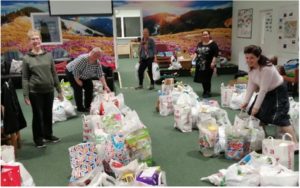 St. Vincent lived and breathed collaboration. He said that “the poor suffer less from a lack of generosity than a lack of organisation” (Marie Poole, “Charity of Women (Chatillon-les-Dombes) edited & translated, in Vincent de Paul Correspondence and Document, 14 vols. (New York: New City Press, 2003), 13b: 8).

His passion for the poor and profound humility might have revealed to him that in order to serve the poor better “organisation and networking” are very important. Father Robert Maloney, C.M, whose mandate as the superior general of the Congregation of the Mission saw the emergence of the modern day Vincentian Family Collaboration, notes that St Vincent is unbeatable when it comes to organisation and networking.

Vincent realised that effective evangelisation and service of the poor would require organisation. And to this end, he created numerous lay groups “The Charities” and founded two congregations (Robert Maloney, “Understanding Vincentian Collaboration”, www.famvin.org). 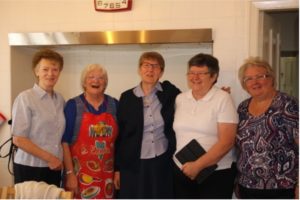 St Vincent mobilized women (volunteers) of Chatillon-les-Dombes to founding the Ladies of Charity on 8 December 1617. They are known today all over the world as AIC (International Association of Charity). He collaborated with the De Gondi family in founding the Congregation of the Mission on 17 April 1625. In 1633, St. Vincent invited Louise de Marillac to assist him with the Charities, in the parishes of France. On 23 November 1633, St. Louise, in her own home, began to train young women for the needs of the poor and how to live in community, which later became the company of the Daughters of Charity, the largest female religious community in the church today.

Frederic Ozanam (1813-1853), the co-founder of Society of St Vincent de Paul and his companions’ vision of “Vincentian preference or self-forgetful charity over ostentatious philanthropy” was also inspired by Rosalie Rendu (1786-1856); a Daughter of Charity who served the needy and stood at the barricades with the poor.

St Vincent was a man of collaboration and creativity, which put him ahead of his time. He was a man at cross roads, a man of change and a precursor of the “option for the poor”. He urged his followers to “assist the poor in every way, and to do it both by yourselves and by enlisting the help of others” (Vincent de Paul, 1581-1660, “In His own Words…Collaboration & Creativity” in Vincentian Center for Church and Society, New York: St John’s University, 2000).

Vincent was very humble and this made him to ask others to help him in all his projects. He was not attached to any messianic delusions to think that he had to do it on his own but trusted in divine providence and in collaboration with others. Vincent found his strength in accepting his limitations. He found his success in trusting in the providence and in collaborating with others. St. Vincent was truly ahead of his time.

Prayer of the Vincentian Family 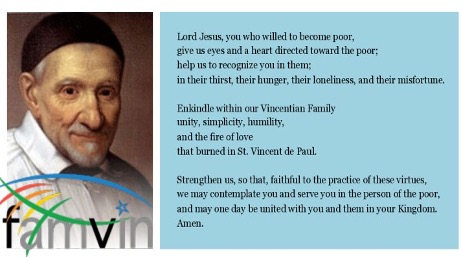